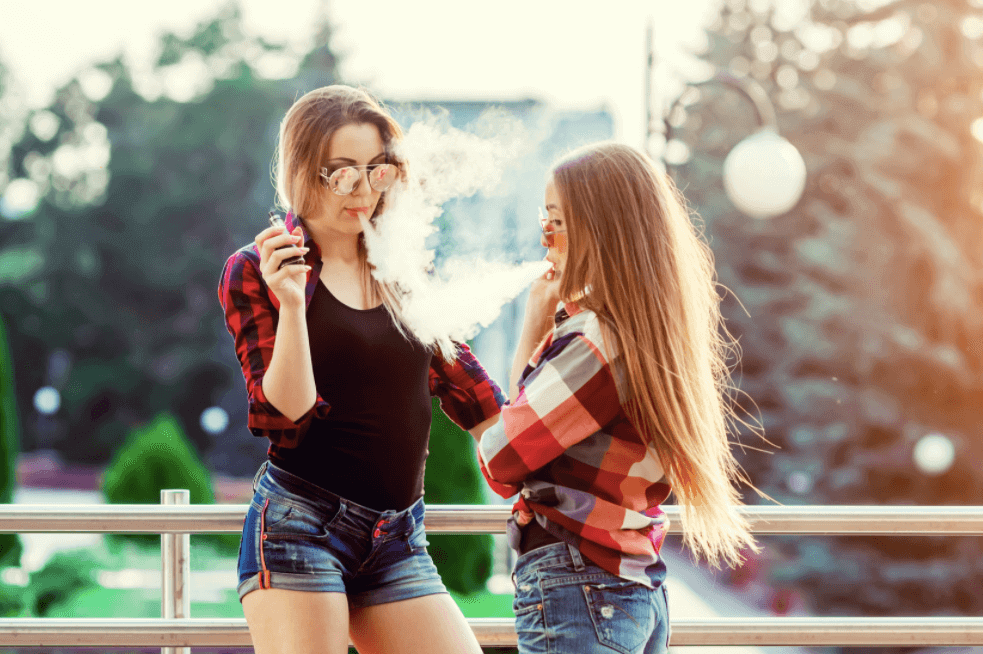 Within the past decade-and-a-half, a new threat to teenage health has developed: vaping. While many parents began their journeys with the threat of cigarettes, drugs, and alcohol looming large in the future, few probably anticipated that their teenage sons and daughters would be using battery packs to puff clouds of fruit-colored smoke; it’s almost dystopian.

Even though the product has only been available on the market for fifteen years or so, and there are restrictions in place that restrict marketing to teenagers, young adults have nonetheless fallen victim to vapes. Sadly, this undoes a lot of the work done in recent years to decrease teen nicotine dependence.

To make sure you and your teen both know the full risks of vaping, here’s a comprehensive article detailing what vaping is, what we know (and don’t know), and why it’s a massive risk to your teen’s health.

Vaping: What is It?

The term “vape” is pretty all-encompassing. You may have heard words like juul, mod, rig, or pen, thrown around. They might differ in appearance, but they’re ultimately all “vapes.” Some are easier to conceal then others, and some are more expensive and have a wider array of options in terms of nicotine content and longevity, but for our intents and purposes, they’re all ultimately the same in terms of the risks they prevent to your teen.

All these different devices are battery-powered. Using the battery, they heat capsules of liquid into a vapor that the user breathes in. This liquid is usually a mix of nicotine, flavoring, and various other chemicals that are believed to be harmful. Vapes were originally meant to be cessation aids to quit smoking (users can dial down nicotine content gradually, theoretically helping them reach 0), but they are not recognized by any major health organization as a legitimate way to quit smoking. Vapes are still seriously addictive, and sometimes the liquids contain harmful chemicals linked to lung disease and toxic metals like nickel and lead, according to the US Surgeon General.

Vaping is No Joke

Contrary to popular belief, there’s no proof that vaping is less harmful than traditional cigarettes. With vaping being such a new addition to the tobacco market, researchers still don’t know all the long-term harms that e-cigarettes and vapes present to users.  The bottom line is that vaping is still a form of tobacco, so it’s harmless no matter what. The possibility of dangerous metals and other unknown substances is only an added risk.

And unfortunately, use of vapes by teenagers and adolescents is on the rise. According to a 2018 study from Monitoring the Future, an annual survey on drug and alcohol use in teenagers, vaping is actually increasing nicotine addiction in teens, not decreasing it. The increase in teenage vaping from 2017 to 2018 was the most dramatic increase of any addictive substance in the organization’s history.

How to Stop Teen Vaping

If you think your teenage son or daughter is vaping, it’s important to deal with it in the correct way. Even if you’re scared for your teen’s health or angry at their behavior, you need to stay calm. Being overly confrontational or too harsh will actually make it harder to get your teen to stop vaping. They might rebel against you by vaping more. Or, if your teen has become addicted, your anger will close off any opportunity for you to help them. They won’t feel safe coming to you for advice on how to stop. Instead, there are plenty of positive parenting solutions you can use to talk to your teen and help them stop vaping.

One important thing to consider is that most teens are only vaping in order to experiment. Teenagers don’t see vaping as a super serious issue, and might only engage in it a few times. If you catch your teen vaping, be honest with them. Let them know you’re concerned about their health, and ask how long they’ve been doing it. As much as you can, try to show your teen that you aren’t trying to punish them, but help their long-term health.

Have them do some of their own research as to the negative side effects of vaping, and have them report back to you. There’s a big chance your teen doesn’t understand just how bad vaping is and has succumbed to the myth that it “isn’t that bad.” Teens don’t always respond well to long lectures by their parents, so try to get them to learn about vaping on their own. If they discover how harmful it is by themself, they’ll be more likely to stop!

Andy Earle is a researcher who studies parent-teen communication and adolescent risk behaviors. He is the co-founder of talkingtoteens.com, ghostwriter at WriteItGreat.com, and host of the Talking to Teens podcast, a free weekly talk show for parents of teenagers.